As mentioned in previous years on this blog, sugar season is not over until the fat lady sings.  This aria is what I heard her sing on Friday:

I recalled I had first learned of this song from a book by E.B. White called The Trumpet of the Swan which is about a trumpeter swan named Louis from western Canada who plays the trumpet. Louis composed this song for his beloved Serena. 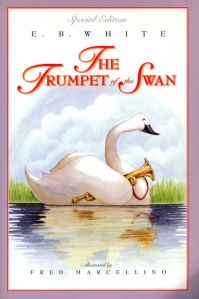 I pulled the book off the shelf and stumbled upon a paragraph that expresses the turn of the season.

“But one day a change came over the woods and the pond. Warm air, soft and kind, blew through the trees. The ice, which had softened during the night, began to melt. Patches of open water appeared. All the creatures that lived in the pond and in the woods were glad to feel the warmth. They heard and felt the breath of spring, and they stirred with new life and hope. There was a good, new smell in the air, a smell of earth waking after its long sleep.The frog, buried in the mud at the bottom of the pond, knew that spring was here. The chickadee knew and was delighted (almost everything delights a chickadee). The vixen, dozing in her den, knew she would soon have kits. Every creature knew that a better, easier time was at hand—warmer days, pleasanter nights. Trees were putting out green buds; the buds were swelling. Birds began arriving from the south. A pair of ducks flew in….”

(continuing in the voice of the scribe)

…and built a nest at the base of a maple tree, on the south side facing the sun. The maple tree and many others grow on a strip of floodplain between Miller Brook and Nebraska Valley Road. Mr. and Mrs. McGovern, who live across the road with their family, discovered the nest on the day they pulled the sap buckets and taps from the maple trees. Sugar season was over.

The McGoverns and the mother duck-to-be, whose coloring matched the bark of the tree, startled each other and Mrs. Mallard flew off. Later that day, she returned to cover her ten buffy-green eggs with bits of down and leaves. The McGoverns have since seen Mrs. Mallard sitting in her nest.

2 thoughts on “Mallards and Maples”