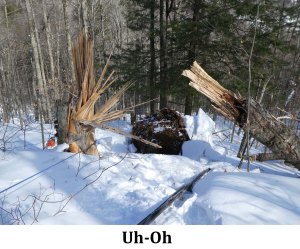 Chief of Operations says from his chair in front of the woodstove, Scheduling crew [to walk the tubing lines] is an absolute nightmare. Here they are, raring to go, and what do I tell them? They don’t want to sit around all day just in case it warms up enough to turn the vacuum on.

Mrs. Chief of Operations: This darn Daylight Savings Time just makes it worse. Of course the sap isn’t running yet, it’s really only 8am. She pours herself a cup of tea in the white cup with blue designs from China

that used to have a cover but it broke years ago.

—I told the guys to just wait until Thursday.

—Thursday?! Wednesday’s supposed to be warm, too.

—But look at the low the night before — 12 degrees. I told them MAYBE Wednesday afternoon. It’s making us wait this year.

—And the time change just makes it worse. The runs will kick in at 11am instead of 10am and we’ll get out of the sugarhouse at 3am instead of 2am. You wouldn’t think it would matter, but the phone starts ringing at 8am new time. Aarrgghh…I’ll bet it’s going to run night and day once it gets going, in which case the new time won’t matter so much, I guess.

—The lady from Connecticut I shoveled out yesterday says she thinks this week will end sugaring season there, says Chief of Operations. I said ‘What? We haven’t even begun!’ I guess they’ve been getting runs since January. I think she works for a place that’s like Merck Forest in Rupert. Are they still sugaring?

WHILE WE WAIT, This Too Is Sugaring:

When is an item too far gone to patch? The Nebraska Knoll standard is when it’s at the point of Patch upon Patch upon Patch. A clerk at Johnson Woolen Mills, the source of the wool jackets and pants worn by hunters and sugarmakers for generations, said it’s a tough market. Outdoors women and men keep their clothes going year after year.

4 thoughts on “It’s making us wait”